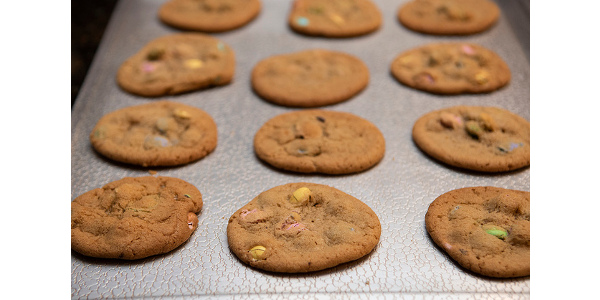 Kansas State University researchers are looking for ways to reduce the risk of pathogens in flour, studies that could impact the product's safety from its origins on the farm to its use in home-baked goodies. (Courtesy of K-State Research and Extension)

MANHATTAN, Kan. — Most consumers typically don’t think that a food safety risk lurks in their kitchen’s flour bin, but a handful of product recalls since 2015 in the United States and other countries is changing that mindset.

Rather than accept that it’s just the way the cookie crumbles, scientists at Kansas State University are taking the challenge head on to find ways to ensure the safety of flour and the many products that are made from it.

“When I was trained as a food scientist, one of the things we were taught is that there were a few products that were generally safe,” said Gordon Smith, department head for grain science and industry at K-State. “Maybe those products were not absolutely safe, but they were on a continuum of things that were much lower risk. Flour was one of those products.”

In January, 2019, General Mills announced a voluntary national recall of five-pound bags of its Gold Medal unbleached flour, citing the potential presence of Salmonella. There have been no confirmed consumer illnesses as a result of the suspect flour, but the company issued the recall “out of an abundance of care,” according to a statement.

The incident symbolized a heightened awareness in the flour industry that the raw product could carry such potent pathogens as Shiga toxin-producing E. coli (STEC) or Salmonella introduced at some point from harvest in a crop field to the consumer’s kitchen.

“We are curious about where the contamination comes from,” Smith said. “We can speculate and speculate, but no one knows the answer to that positively or if there’s a single source. No one knows where it comes from or what happens during storage or processing.”

Armed with world-class laboratories capable of studying dangerous pathogens in controlled settings, the university is replicating commercial milling and baking processes and introducing E. coli and Salmonella at high doses to determine ways to reduce the risk of contaminated flour and finished bakery products.

K-State food scientist and microbiologist Randy Phebus has worked for more than 30 years tracking foodborne pathogens. Since 2012, Phebus has been a lead investigator on a $25 million project to investigate the presence of STEC in beef products and cattle.

He’s now part of a K-State group that has turned a watchful eye to flour.

“Ultimately in flour, like in many other products, we would like to have a ready-to-eat, pasteurized product that is safe,” he said. “The (food) industry is looking for that type of product, but the reality is that raw, agricultural-based products like flour are not risk free.

“We are on a quest to find a processing method or antimicrobial technology that will help the industry reduce these food safety risks to a very low probability of causing consumers to get sick or companies to have a contamination-related recall.”

Kaliramesh Siliveru, an assistant professor in the Department of Grain Science and Industry, is leading computerized modeling of grain processing, re-creating the life of flour from the time a wheat stalk is grown in a farmer’s field to the time flour is scooped out for a homemade cake or cookies.

That work is finely detailed, essentially building a picture of the entire environment for flour processing.

“You have to make certain that the entire chain is clean,” Siliveru said.

He added that, in practice, computerized modeling provides a fuller understanding of the potential spots where E. coli or other pathogens may be found, whether that be in the field, during harvest, at the flour mill, in a consumer’s kitchen or someplace else.

“Computer modeling also provides insight into how these pathogens are transferred in the supply chain from farm to table and allows us to design a kill step to inactivate these dangerous pathogens,” Siliveru said.

Phebus notes that K-State’s work responds to an important industry issue to maintain the safety of flour and baked products.

“Companies have a brand and the liabilities that go with marketing retail or wholesale flour,” he said. “It’s also a very important food service issue because if you’re a pizza parlor or something like that making bread, you’ve got to know that you’re not going to be making people sick.

“And it’s a home kitchen issue because if you’ve ever baked a cake, you know that even if you’ve baked the cake well, the flour gets all over the kitchen, so it’s a cross-contamination hazard.”

Smith noted that K-State’s work includes faculty in the university’s grain science department and the Food Science Institute. K-State also is working with the Manhattan-based American Institute of Baking, which works with more than 200 bakery companies across the United States, and several milling and processing equipment companies.

Parts of the studies are being carried out in the Hal Ross Flour Mill, located in the university’s grain science complex in Manhattan, and in food safety labs in the Department of Animal Sciences and Industry.

“It’s high level research, but it’s also information that is part of teaching students,” Phebus said. “We may be training the first generation of food science, milling and baking science students who will be food safety experts concentrating on grain handling, flour milling, bakery products and even pet food.”