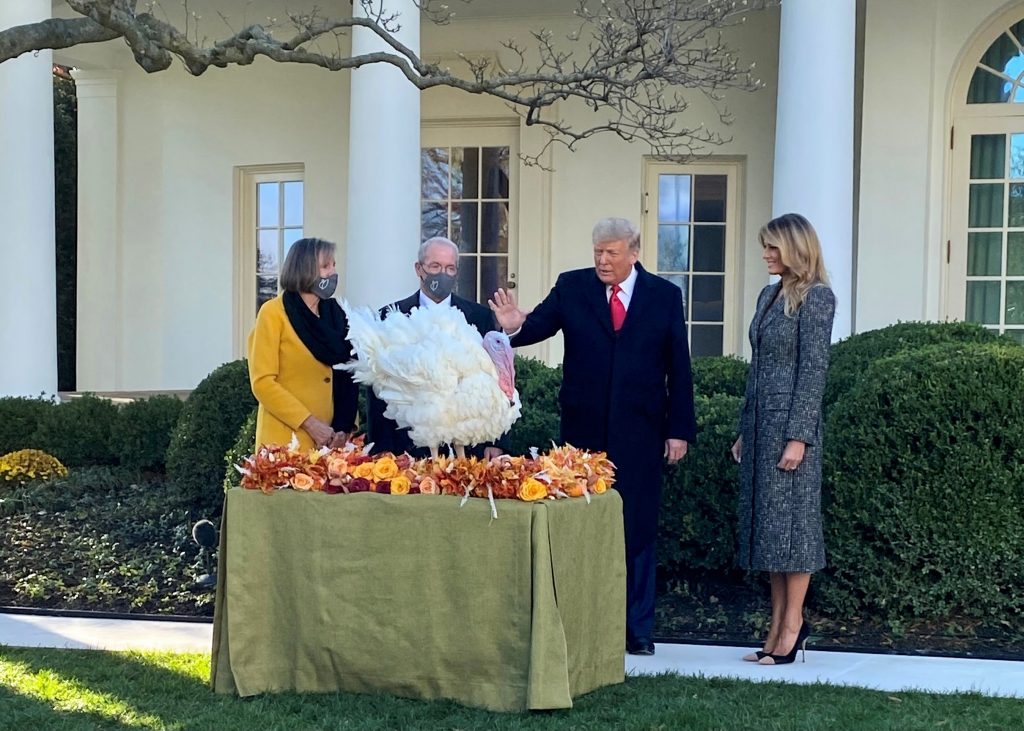 “Corn” and his alternate, “Cob,” received a formal pardon from the president and will now reside on the campus of Iowa State University in Ames, Iowa. The National Thanksgiving Turkey Presentation is a time-honored American tradition, dating back to 1947.

“This week is a time for all of us to remember that we live in the greatest and most generous country on Earth,” said President Donald J. Trump. “Every American can be united in thanksgiving to God for the incredible gifts He has bestowed upon us—the blessings of family, community, and this exceptional country.”

“As Americans prepare for what will undoubtedly be a unique Thanksgiving holiday, it is an honor to be invited to continue this beloved tradition of presenting the National Thanksgiving Turkey to President Trump and the First Lady,” said NTF Chairman Ron Kardel. “This Thanksgiving, possibly more than ever before, we are grateful for the opportunity to spend time with loved ones, no matter what celebrations may look like. This event not only represents the unity and togetherness of the holidays but also the hard work and dedication of the turkey industry.”

The National Thanksgiving Turkey and alternate were raised by NTF Chairman Ron Kardel. Kardel is a sixth-generation Iowa farmer and raises turkeys, corn and soybeans on his family farm in Walcott, Iowa. He has farmed full-time for the past 45 years and is a founder and vice chairman of the board of West Liberty Foods, LLC, a grower-owned cooperative. Kardel was joined by his wife of 44 years, Susie, his three children, their spouses and seven grandchildren.

The annual presentation of the National Thanksgiving Turkey at the White House is a highly anticipated tradition in the nation’s capital, signaling the unofficial beginning of the holiday season and providing the president and the nation an opportunity to reflect publicly on the meaning of Thanksgiving. The presentation also highlights the contributions of America’s turkey growers as well as the important role of agriculture in modern America.

While in Washington, D.C., the turkeys stayed at the historic Willard InterContinental, adjacent to the White House grounds. Following the presentation, “Corn” and “Cob” will return home to Iowa State University where they will live in a custom-built enclosure under the care of animal science and veterinary medicine students and faculty. The turkeys will be available for the public to visit and learn about the university’s programs in animal and poultry sciences and veterinary medicine. Iowa is the seventh largest turkey-producing state in the United States.

Jaindl’s Turkey Farm of Orefield, Pennsylvania, provided the president’s family with two dressed turkeys as part of the First Family’s food donation to a local charity.