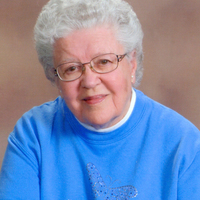 Ellen Marie (Powell) Sorum passed away unexpectedly Sunday, December 1, 2019 at Highland Park Care Center in Alliance. She was born March 17, 1924 in a sod house southwest of Hemingford, NE to Lawrence and Ellen (Jagger) Powell. She graduated from Hemingford High School at age of 16 and went on to the American School of Business in Omaha in 1942. When they opened the Air Base in Alliance, she came back to work in the Personnel Department for the Army. In 1943, she transferred to the Scottsbluff office.

In the summer of 1943, Keith Sorum happened to be on leave visiting his parents in Scottsbluff, NE. While visiting a friend, he saw her in an office window. He knew immediately he would marry her and she always said how handsome he was in his Navy uniform. They dated every night he was on leave and were engaged by August. Keith then left for Radio School in Boston. They were married in Scottsbluff on March 22, 1944. The day after the wedding they boarded a troop train back to Boston (Marie being the only female on board). Running short on time, Keith had to run to his ship and Marie had to make her way alone In Boston. She had the nerve to tackle the subway system in downtown Boston whereshe found a job as a secretary to the manager of the American Laundry Machinery Co. They loved her accent there!

In September 1944, she came back to Alliance while Keith was overseas and started work at the Nebraska Stock Growers Association where she worked until 1990, with a few years off to raise three children. There she did all the typing and ads for the Nebraska Cattleman magazine. She planned their state conventions.

When the war was over in 1946, Keith and Marie moved to a farm just west of Alliance. In 1958, Butch and Dortha Peltz built a new home for them on Cheyenne from a drawing on a paper sack. Keith and Marie lived there until they moved to Highland Park in 2014.

She was preceded in death by her husband, Keith, his parents, her parents and four younger brothers; Lloyd, Ralph, LeRoy, and Dean Powell and sisters-in-law, Dorothy and Vera Powell.

She was a 55+ year member of Chapter GC, P.E.O. and a life-long member of the United Methodist Church. She loved bridge, genealogy, lunch with friends, and her grandchildren who she called the “Magnificent Seven”.

Funeral services will be held at 2:00 p.m., Friday, December 6, 2019 at the United Methodist Church with Reverend Gideon Achi officiating. Burial will be in the Alliance Cemetery.  Visitation will be from 1-5 pm on Thursday, December 5 at Bates-Gould Funeral Home. A reception will follow the funeral services at the Westside Event Center from 3-5 pm.