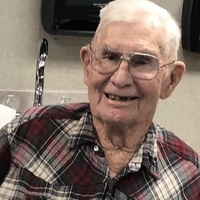 Funeral Services will be held at 2:00 p.m., Wednesday, November 13, 2019, at St. Mark’s Lutheran Church in Oshkosh with Pastor Scotty Ray and Pastor Jerry Smith officiating. Interment will follow in Ash Hollow Cemetery near Lewellen with Military Honors provided by the United States Army.

Visitation will be held at the church one hour prior to the service on Wednesday.

Memorials may be made in LeRoy’s name.

LeRoy Thelander was born on December 16, 1921 in Kanorado, Kansas to Nathanial F. and Carrie (Rudman) Thelander. He spent his childhood around the Big Springs area and in 1926 they moved south of Lewellen. LeRoy attended grade school at Garden County District #5 and high school in Julesburg, Colorado. He later moved to Detroit, Michigan for employment. Upon his call to service in World War II in 1942, he completed basic training and was sent directly to Europe where he served int eh 533rd Battalion in France, Germany, Sardinia and North Africa. He returned to the United States in November 1945, at the end of the war.

LeRoy was united in marriage to Helen Arlene Rentzsch on February 20, 1945 in St. Francis, Kansas. They made their home on the ranch and to this union, one son, Patrick, was born.

He was preceded in death by his parents, wife Arlene in 2011, one brother, three sisters and in-laws.