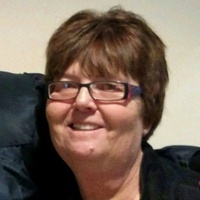 A celebration of life memorial luncheon will be held at the Lion’s Den in Chappell, Nebraska on October 3rd at 10:00am-2pm (MST).

Memorials can be made to Pam’s family.

Holechek-Bondegard Funeral Home and Cremations in Chappell is serving the Saunders family.

Pam was born August 1st, 1954 in Alliance, Nebraska to Jerrold and Flora Murray.  She spent her young life and school years in Hyannis, Nebraska.  She married Clyde Eugene Saunders on February 14th, 1981 in Ogallala, Nebraska.  Together, they made their home in Chappell, Nebraska for many years before moving to Kearney, Nebraska for the last several years.

Her favorite place to be was at Lake McConaughy camping with family and friends.  From when she was a young girl up until the very day she passed she loved being at Big Mac.  Some of her most favorite memories and happiest times were at the lake.  She and Gene had hoped to retire and spend the rest of their days together there.

She loved being a grandma and cherished the time spent with her three grandchildren and family.  She loved celebrating the 4th of July with family and friends and always made sure she found a way to bring her family together.  A yard full of kids, a table full of food, and fireworks in the sky would outline the perfect day for her.

Pam is survived by her husband of thirty-nine years, Gene, of Kearney; her children, son, Shane Harper, of Kearney, Nebraska, son, Ryan and wife (Abby) of Omaha, Nebraska, and daughter, Jodi and husband (Cody) Harms, of Chappell, Nebraska; grandchildren, Kordell Lovitt, Ava Saunders, and Griffin Saunders; and a host of other relatives and friends.

Pam was preceded in death by her parents, Jerrold and Flora, and son, Ronald.