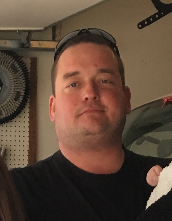 A memorial service for Zachary Allen Hrasky, age 38, of Scottsbluff, who died June 19th, 2020, will be held at the Weborg 21 Centre on the Scottsbluff Gering Highway at 2:00pm on Thursday, June 25th, officiated by Pastor Bob Haverick. Inurnment will be at Mitchell City Cemetery.

Zachary was born July 13th, 1981 in Scottsbluff, Nebraska, to Timothy Allen Hrasky and Brenda Schlager. He received his education from the Gering Public Schools. He married Mckenna Jessen, and to this union were born two children, Dillon and Madi Edens. He was also blessed to have another child, Oaklynn Elizabeth Hrasky, and he loved his children greatly. His fiancé, Shauna Reagan, and her son, Skyler, were well beloved by him.

He drove truck for B Squared Farming and Trucking. His passions were music, trucks, and barbecuing—he was a great cook. Zachary lived life to its fullest, and when he loved you, you knew it.

He was preceded in death by his grandparents and his father.

Online condolences may be left at www.dugankramer.com