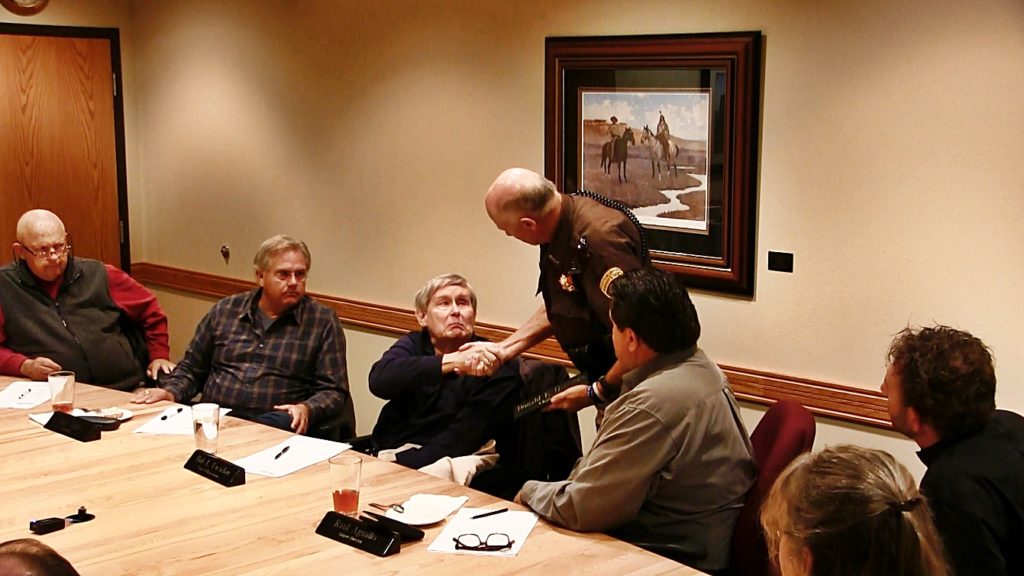 Overman’s son, Scotts Bluff County Sheriff Mark Overman, accepted Don’s board name plaque on behalf of the Overman family, presented by board chair Bob Unzicker, who invited comments from those in attendance on memories they had of Don.

Overman served as chairman of the Western Nebraska Regional Airport Board as both an appointed and elected member from 1996 until his death.  Following a major remodel completed in 2005, the airport board voted to name the current terminal building the “Donald E. Overman Terminal.”

As vice-chair, Unzicker automatically moved into the chairman role according to Airport Authority bylaws, and the board Wednesday selected member Matt Ziegler to move into Unzicker’s former role of vice-chair.

Airport Director Raul Aguallo told KNEB News they will now advertise next week in the paper for applicants to fill the vacant seat on the board. Aguallo says anyone who lives in Scotts Bluff County is eligible to apply for the seat.

He says the process is basically putting together a resume like you would in applying for a job, so they can get to know what you’re about and why you’re interested in serving on the airport board.

Aguallo says you can just bring the resumes in to his office at the airport and he will go through those and present them to the board. He says they will set up interview dates hopefully sometime in the early part of next month so they can make the announcement at the next board meeting on November 20th.