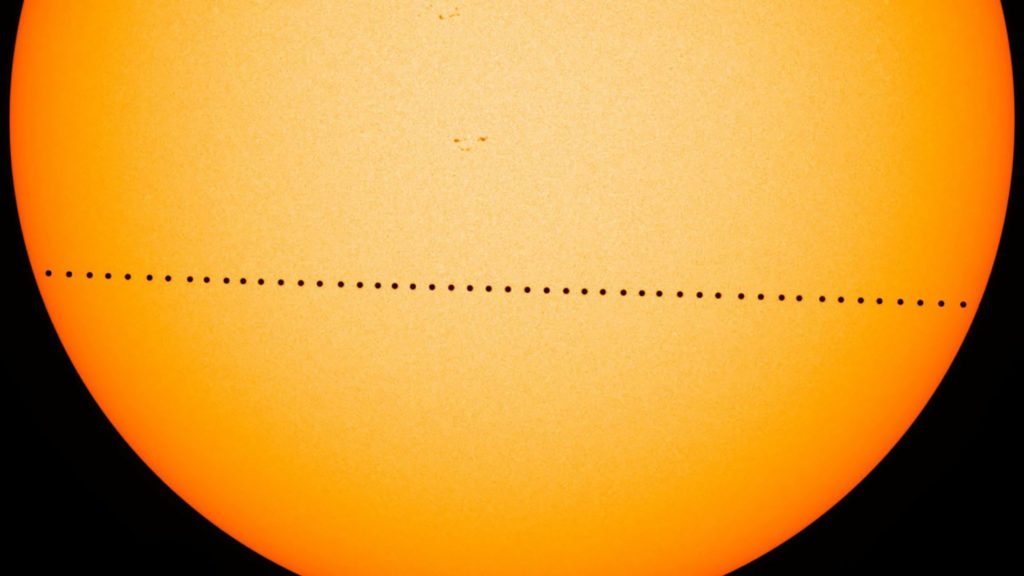 This composite image shows Mercury passing between the sun and Earth in May 2016. The celestial event, which happens about 13 times each century, will occur again Nov. 11. (Photo courtesy of NASA's Goddard Space Flight Center/SDO/Genna Duberstein)

This celestial event is far rarer than a solar eclipse.

On Nov. 11, Mercury will pass directly between the sun and Earth, and the phenomenon can be witnessed right here in Kearney.

“During a planetary transit, a planet crosses over our field of view of the sun,” said Joel Berrier, an assistant professor in the University of Nebraska at Kearney’s Department of Physics. “This event is similar to an eclipse, but since only a small portion of the sun is obscured, it is not as easily noticed or observed without specialized safety equipment.”

Weather permitting, UNK’s departments of physics and astronomy will have solar-observing telescopes available for anyone interested in viewing this event. The telescopes will be set up on the north side of Bruner Hall on the UNK campus.

From Earth, only transits of the inner planets Mercury and Venus are possible.

On average, there are 13 transits of Mercury each century, according to NASA. If you miss this transit, the next one happens in November 2032, but that event won’t be visible in the United States. The next transit visible from the U.S. will occur in May 2049.