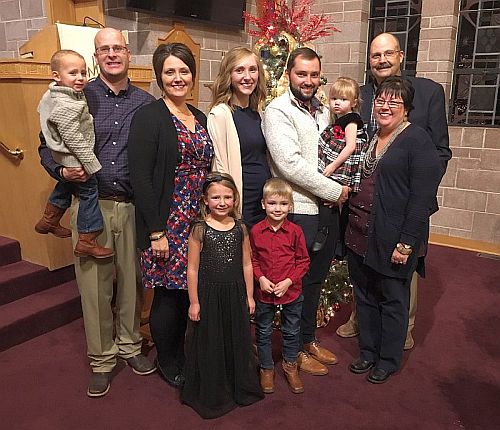 From the 1980s Farm Crisis, the dairy buyout, BSE (bovine spongiform encephalopathy) and trade wars, our 2019 Farm Family of the Year has ridden the rise and fall of the cattle industry from which they derive their livelihood. Both Craig and Terri Uden grew up on farms where raising beef was a key part of their respective family operations and today they continue down the road of raising and selling high quality beef to customers here and abroad.

A fourth-generation cattleman, Craig grew up in south-central Nebraska near Bruning. The son of Wayne and Margaret Uden, he was born Jan. 28, 1961. His siblings include two sisters, Carmen McKeever and her husband, John, of Wymore, Neb., and sister Amy Prior and her husband, Rex, of Imperial, Neb.

A 10-year 4-H member his favorite projects were beef, pork, welding and tractor and he was an active member of his county’s livestock and meats judging teams.

He attended Bruning High School where his activities included football, basketball, track, speech, plays, chorus and band. Following his 1979 graduation from Bruning High School he attended the University of Nebraska-Lincoln where he majored in animal science. He was a member of the university’s meats and livestock judging teams and participated in Little Ak-Sar-Ben. He also was a member of Alpha Gamma Rho fraternity.

As a participant in the university’s fledgling feedlot internship program, he landed a spot with veteran Dawson County cattleman Dale Kugler in the summer of 1982. Impressed with his drive, determination and ability to manage people, a year later Kugler recommended Uden to six partners seeking a manager for the new feedyard they were opening.

“They called me at 5 a.m. and said, ‘ We’ve got this new feedyard and we need someone to run it. Are you willing to give it a try?’ I came to Darr Feedlot on June 1, 1983, less than a month after leaving college. We started from ground zero with a 1,500-head capacity lot.”

Thirty-six years later he is still at Darr and today the commercial cattle feeding operation has a 40,000-head capacity.  By investing in the enterprise during the 80s and 90s, Uden is now one of the feedlot’s partners.

Over in Northeast Nebraska at Wisner Dave and Jerri Fullner welcomed a daughter, Terri into their family on Feb. 28, 1961. She had one brother, Rick, who now lives in Columbus, Neb., with his wife, Cori.

Terri was an 8-year 4-H member in Cuming County with sewing, foods, home environment and beef her favorite projects. In addition, she was a member of the county meats and home economics judging teams.

Among her high school activities were Pep Club, FHA, National Honor Society and serving as annual editor for two years. After graduating from Wisner-Pilger High School in 1979, she attended the University of Nebraska-Lincoln to study home economics.

She continued her 4-H service in the summers working at the Eastern Nebraska 4-H Center at Gretna, including one year as a camp counselor, and then spent two years on the Camp Cook Crew at the Nebraska State 4-H Camp at Halsey.

Terri graduated from UNL with a bachelor of science degree in vocational home economics in 1983. Following graduation she managed a day care center in Norfolk, Neb., for one year, then from 1984-85 she taught home economics at St. Edward, Neb.

After two years working apart, the Udens were finally able to work from the same community when Terri started a job as Dawson County 4-H Assistant in 1985.

On June 29, 1985, there were married at Terri’s home church and returned to Dawson County. Not only did the couple share in the growth and expansion of the feedlot, they diversified their personal operation to include a commercial cow-calf herd.

In addition, their family grew with the births of daughter, Blair, and son, Andrew. Both Uden children were involved in 4-H from an early age.  From showing sheep in the PeeWee Lamb Lead to eventually raising, grooming and showing their own steers and heifers they began learning the beef industry from the ground up.

He notes he learned the value of involvement at an early age when his father took him to meetings where his father helped form their local cattlemen’s organization. “I’ve always looked at that involvement in these organizations as a tool in the toolbox that allows us to take ideas and information and better our operation back home,” said Uden.

He served on the Nebraska Beef Council as chairman and secretary, the Nebraska Feedlot Council and Nebraska Cattlemen’s Foundation, before moving into a leadership track at NCBA that led to his serving as president of the national organization in 2017. He just completed his year as past president and during 2019 will serve as Chairman of the NCBA Political Action Committee.

As he assumed more and more leadership responsibilities in the industry organizations, Uden relinquished his manager’s position at Darr.  From 2008 to the present he moved into the position of cattle procurement for the feedlot and on those days when remaining NCBA duties aren’t calling he can be found at the feedlot office watching the boards and working the phone to fill pen openings and ensure his customers have the best possible outcome on their feedlot investment.

During his presidency, Uden said his biggest goal was for people to understand the beef industry and how they play a part in it. “I want them to understand how all sectors fit together, from the cow-calf segment to the feedlot to processing facilities to the retailer. It is very much a “Gate to Plate” mentality. It is important to keep educating people involved with our product that there are a lot of hands that touch it and they have ownership.”

It’s all about building relationships, he said. “Educating on both sides doesn’t do any good if we don’t educate the producer about what the consumer wants.”

When the Uden children reached middle-school and high school, Terri left her job as 4-H Assistant to pursue another passion, quilting. From 2002 to 2011 she was a clerk at Prairie Point Junction, a specialty quilting and fabric shop in Cozad, Neb.

When Craig began traveling more heavily with his national organization responsibilities, she left Prairie Point to help with their commercial herd and serve as bookkeeper.

While their parents were busy in their respective professions, the Uden children followed their parent’s lead by being active in 4-H. From local progress shows to the county and state fairs and beyond they showed their fair share of steers and heifers, note Andrew and Blair.

“The best things I remember are the weekends we spent showing cattle as that was the time when we had the whole family together,” said Blair. “All four of us in an extended cab pickup on the road to somewhere in Nebraska to show.

“We didn’t do it for the jackpots or the prizes, but we learned a lot from each other and about our industry. Some years we would travel to 13-plus shows every season and that didn’t include the county fair, state fair or Ak-Sar-Ben. I hope that I can do the same thing with my kids soon.”

Traveling together was a memory also shared by Andrew. “The way my parents worked and included family and friends in their work really inspired me from a young age. Even when we were very young, I remember being drug around to look at cattle all over the Midwest, often staying with family or friends and getting new contacts from them along the way. This brought us closer together and helped teach me how to build and maintain relationships,” he said.

They also learned important aspects of the industry, joining forces as part of the 2007 Dawson County Skillathon team that went on to national competition.

Blair graduated from Lexington High School in 2004 and Andrew in 2007. Among their many high school activities one of their favorites was being in the Lexington High School Marching Band. Blair played trombone and also was in flags, while Andrew played tuba. Rounding out the family involvement was Terri, who served six years as a Band Mom.

Blair went on to graduate from Nebraska Wesleyan University and Andrew obtained his degree from the University of Nebraska-Lincoln. Both are now are married with families of their own. Blair her husband, Jon Caraway, live near Lake Benton, Minn., where they have a registered Red Angus herd. They are the parents of two children, Gabrielle and Parker.

Andrew launched his own high-tech animal information company in Lincoln, Neb., following his UNL graduation. However, the urge to travel, instilled during a trip to Africa while in college, remained with him and in January, he and his wife, Nicolette, and their two children, Asher and Roselyn, moved to Kimpala, Uganda. His business in Africa is called AgVision International and is an ag consulting firm.

Craig and Terri have been involved in many community organizations through the years and volunteered their time for everything from 4-H, T-ball and baseball to the Make It With Wool contest.

Both are active in Trinity Lutheran Church in Lexington where Craig is an elder and for many years portrayed the disciple Thomas in their “Last Supper” drama. Terri served two years as church board secretary, the planning committee and continues to serve as one of 12 funeral chairmen.

Terri’s new adventure in 2019 will be serving as Superintendent of Quilts for the Nebraska State Fair.

In spite of the challenges that constantly arise in the industry, Craig said he remains bullish about the opportunities it presents for anyone who isn’t afraid of hard work and being persistent. “Ag has never been a sprint, it’s been an endurance race,” he said.  “We have a tremendous amount of talent coming into the business right now and I think that says a great deal about where we’re headed.”

The work ethic and value for people shared by the Udens has earned them recognition in many forms over the years, but perhaps the highest praise comes in this tribute from their son: “I still remember my Dad saying, ‘Surround yourself with good people and they will make you better and help you be successful.’ It is the relationships they cultivated, both in our family and in their business, that made them who they are today, and they shaped me into who I am.”

Please join now in congratulating Craig and Terri Uden, the Lexington Area Chamber of Commerce Farm Family of the Year for 2019.