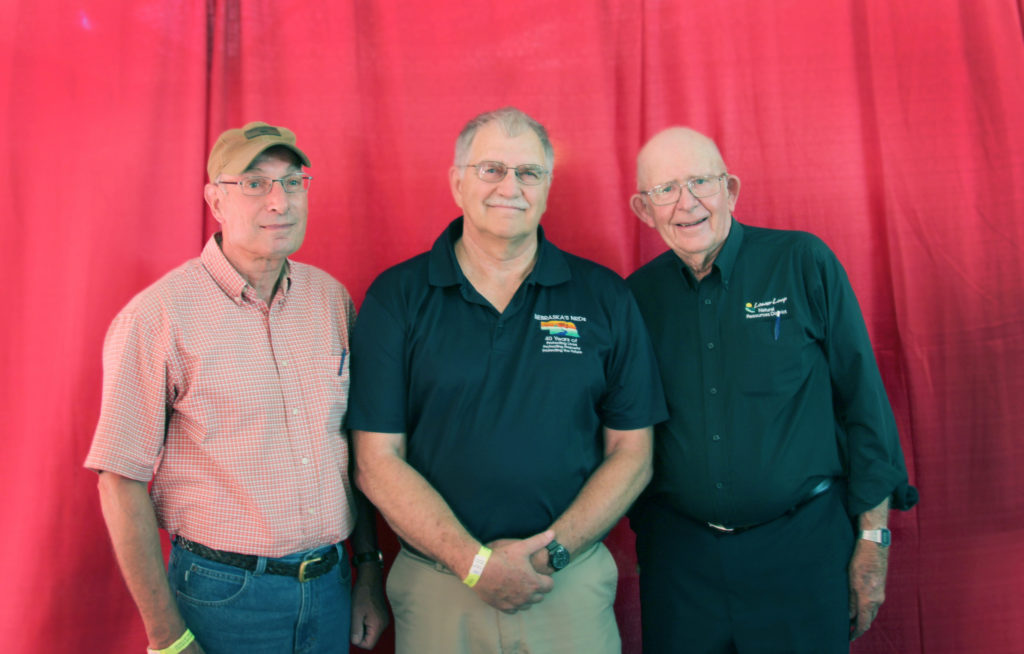 GRAND ISLAND, Neb. – During Husker Harvest Days this afternoon, Nebraska’s Natural Resources Districts (NRDs) recognized three individuals, who will be inducted into the NRD Hall of Fame later this month.

“Nebraska’s Natural Resources Districts projects involve many dedicated individuals working to make the good life great,” said Larry Reynolds, president of the Nebraska Association of Resources Districts. “We’re proud to recognize these outstanding individuals for the significant improvements they’ve made to our natural resources, and the NRD Hall of Fame is one small way to thank them.”

Annually, Nebraska’s NRDs nominate and vote for individuals who have made significant contributions to improving the state’s natural resources. Hall of Fame categories include an NRD Board Member, NRD Employee and NRD Supporter. The NRD Supporter includes an individual outside the NRD system who has shown tremendous care and leadership in Nebraska’s ongoing conservation efforts.

Nominated by the Lower Loup Natural Resources District, Nelson has been on the board of directors since the District’s inception in 1972. His 47 years on the Lower Loup NRD Board make him the only director in the state to serve with the NRD system since day one. Nelson was a key participant in many difficult decisions, including a district-wide moratorium on new irrigation wells and a halt on the expansion of irrigated acres.

“Jim serves on multiple committees within the NRD, which means extra meetings and the devotion of additional time and energy to the District,” said Russ Callan, Lower Loup NRD general manager. “His knowledge of the Loup River system [Nelson’s home is built on the banks] is unmatched, and he is always willing to offer a guided tour on his airboat.”

“We’re on earth for a short time and we need to be stewards of the land and water,” Nelson said. “This award should be given to my family, my wife and four children, who were doing the chores at home while I attended NRD meetings.”

Former general manager of the Lewis & Clark Natural Resources District, Moser retired in 2016 after 43 years with the NRD, but the impacts of his management decisions continue to be felt in northeast Nebraska. In the late 1970s, Moser coordinated flood-control construction along the Aowa Creek. The project included 50 watershed dams, control of more than 55,000 drainage acres and two multi-purpose structures, which all reduced flood impacts to downstream communities and landowners during March floods.

“Tom is a highly-respected member of the community and District and is recognized for commitment to his family, faith and career,” said Annette Sudbeck, Lewis & Clark NRD general manager. “His commitment to natural resources continues in retirement as he shares his expertise with the board, staff and public.”

Moser was also responsible for the development of the Cedar Knox Rural Water Project, which provided drinking water service to 280 residents in 1981. Today, that project has grown to serve more than 890 rural customers and four communities in northern Cedar and Knox counties. Moser also was a key figure in the creation of the Bazile Groundwater Management Area, which works to eliminate groundwater nitrates in four natural resources districts.

“I consider this recognition as the highlight of my career working in natural resources,” Moser said. “It’s gratifying to spend more than 40 years in a position and feel you’ve done good works. It is quite another thing to be selected for this proud honor by your peers, who think you’ve done a good job as well.”

Lower Big Blue NRD General Manager Dave Clabaugh believes Pesek’s leadership, character and personality enables him to bring people together and see a project through to completion, which has been invaluable to the state’s water resources.

In 1975, Pesek participated in the review of the Maskenthine Lake project near Stanton, Nebraska, which was the first to receive funding assistance from the Nebraska Resources Development Fund. Since then, Pesek was part of 72 local water resources projects receiving monetary support through the development fund. After 32 years as an advocate for conservation, Pesek retired from the Nebraska Department of Natural Resources in 2006.

“Tom has been a valued partner in conservation and played a vital role in planning, funding and construction of conservation projects throughout Nebraska,” Clabaugh said. “True passion for conservation like his comes not from a job, but a desire to preserve and protect Nebraska’s natural wonders long into the future.”

“It truly is an honor to receive this award,” Pesek said. “I enjoyed working with the NRDs, cities and other sponsors on local water resources projects in Nebraska to conserve and wisely utilize the soil and water resources of our state.”