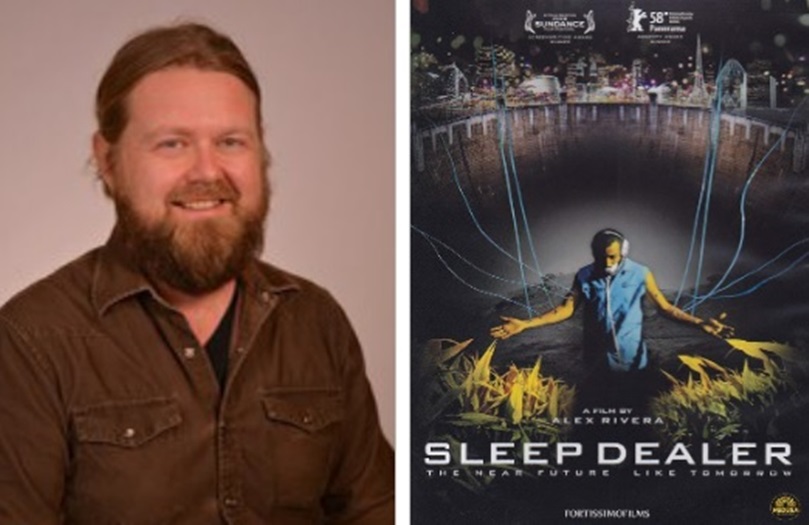 The 2018-2019 Science on Screen film-and-discussion series continues at the Midwest Theater on Thurs., Apr. 4, with “Water, Agriculture, People & Change.”

Weston Eaton – Assistant Research Professor in the Penn State Agricultural Economics, Sociology and Education Department – will talk about his research on community and stakeholder engagement to help address water quantity and quality issues in agricultural contexts. Eaton will link his discussion with the evening’s feature film, the 2008 science fiction film “Sleep Dealer.”

Midwest Theater Development Director Katie Bradshaw explained that the Science on Screen program is a unique way to bring together diverse audiences for an event that both teaches people about science and introduces them to independent, documentary and repertory films that they would otherwise be unlikely to see on the big screen.

“Science on Screen is a really creative format for an educational film event,” Bradshaw said. “Each event is very different. The speaker’s science subject matter and the subject matter in the film is sometimes only loosely related, as is the case with this event.”

For “Water, Agriculture, People & Change,” Eaton will talk about his research on how collaborative, stakeholder-driven approaches to addressing water issues in agricultural contexts can open new opportunities for improved water management, which relates to the opening scene of “Sleep Dealer.” The rest of the Spanish-language film, which will be presented with English subtitles, envisions a science fiction scenario of how technology, poverty, global labor markets, and the military and border security might intersect and affect people’s lives.

Bradshaw said the event will appeal to anyone who works with water resources in an agricultural context, and also to fans of science fiction or foreign film.

This event is open to the public, and admission is FREE, thanks to event sponsors and partners, including the University of Nebraska-Lincoln Panhandle Research and Extension Center, Scotts Bluff County Farm Bureau, WyoBraska Gives donors, North Platte Natural Resources District, Nebraska Arts Council, and Nebraska Cultural Endowment. Every audience member will get a free ticket for a chance at winning a raffle prize.

Legacy of the Plains Museum is collaborating with the student educational portion of this event, in conjunction with its special Smithsonian Institution traveling exhibit “Water/Ways,” on display through April 12.

Science on Screen is an initiative of the Coolidge Corner Theatre with major support from the Alfred P. Sloan Foundation.

WHAT: FREE* Science on Screen film-and-discussion
WHEN: Thurs., Apr. 4 at 7:30 p.m.
The event is FREE*, but freewill donations are welcomed

Keynote speaker bio: Weston M. Eaton is an Assistant Research Professor in the Agricultural Economics, Sociology, and Education Department at Penn State. He leads the Socio-Behavioral Research Team with the USDA NIFA grant “Securing Water for and from Agriculture through Effective Community and Stakeholder Engagement.” Wes’ research investigates public responses to emerging technologies, roles played by experts and expertise in energy and agricultural technology transitions, and improving engagement across experts and publics.

Film synopsis: Memo Cruz (Luis Fernando Peña) is a young man in near-future Mexico. When his family is victim of a misguided drone attack he finds himself with no option but to head north, towards the U.S./Mexico border. But migrant workers cannot cross this new world border – it’s been sealed off. Instead, Memo ends up in a strange digital factory in Mexico where he connects his body to a robot in America. Memo’s search for a better future leads him to love, loss, and a confrontation with a mysterious figure from his past.
Film rating: PG-13
Film run time: 1 hour 30 minutes
Film is in Spanish with English subtitles

This film-and-discussion event at the historic Midwest Theater in Scottsbluff is a part of the national Science on Screen program supported by The Coolidge Corner Theater and the Alfred P. Sloan Foundation. The goal of the Science on Screen series is to increase science literacy by creatively pairing screenings of classic, cult, science fiction, and documentary films with lively presentations by notable experts from the world of science and technology. Each film is used as a jumping-off point for a speaker to introduce current research or technological advances in a manner that engages popular culture audiences. For more information about Science on Screen, visit <http://scienceonscreen.org>.

Rep. Fortenberry signs onto bill that could offer $500 million to fairs