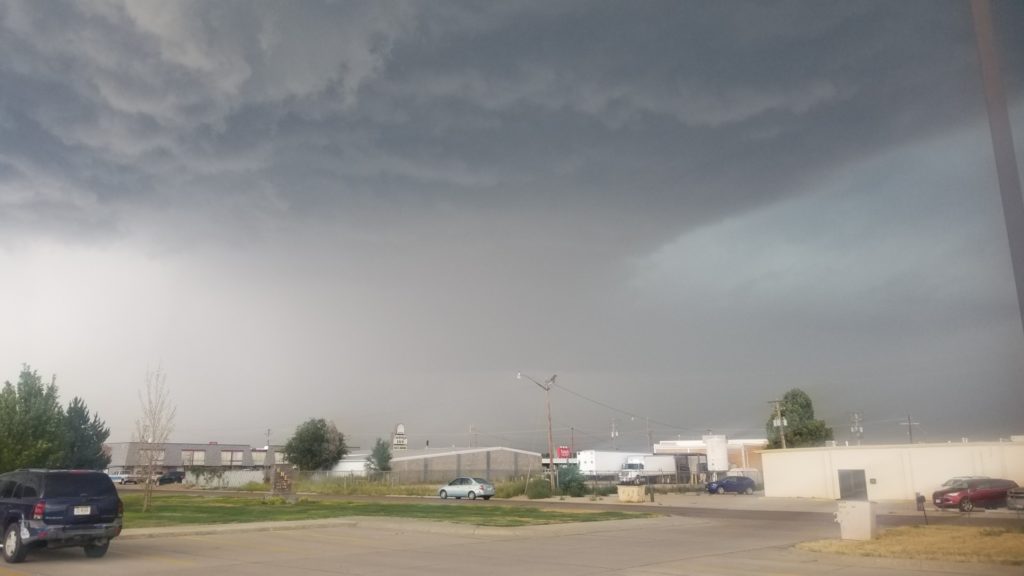 A late afternoon, long-track storm brought golf-ball and larger hail and a swath of damage through parts of eastern Wyoming and the Nebraska Panhandle Thursday.

The storm had it’s genesis west of Lusk, Wyo. around 1 p.m., with the public reporting hail of up to one inch diameter 23 miles north of Torrington. North of Henry, a storm spotter reported 2 inch hail shortly after 3 p.m., and by the time the storm reached Scottsbluff around 3:40 p.m. it was dropping a large volume of two-inch and larger hail for about 3 minutes in duration.

National Weather Service reports indicated significant damage in Scottsbluff  to houses, including windows and roofs, vehicle glass and body panels and trees. Hailed-out crops were reported along the storm track from north of Morrill to areas southeast of Scottsbluff and Gering, parts of which also saw some large hail.

Western Nebraska Regional Airport Director Raul Aguallo tells KNEB News the afternoon flight for Skywest was loaded and preparing to leave when the storm hit. Damage to the plane was such that the passengers had to disembark for safety reasons. Aguallo says a mechanic will be called in to check the air-worthiness of the aircraft before it can be ferried empty to Denver for further examination and repairs. Despite the issue with that aircraft, Aguallo says Skywest will likely bring in another plane so the morning flight could fly as scheduled.

Insurance adjusters are anticipated to be very busy in the coming days and weeks processing damage claims.

ZM Lumber in Scottsbluff is continuing to offer free plywood for hail broken windows just bring your measurements, they are open until 5:30 Friday and 7 to 4 Saturday.  They are located north of Case IH.