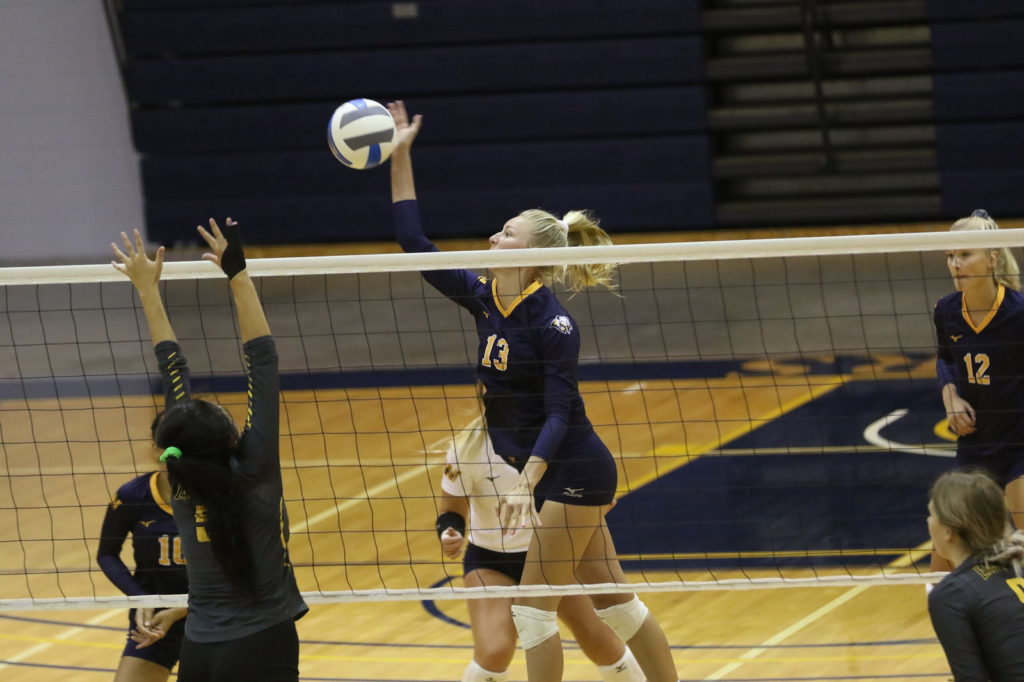 The contest was all the billing made it to be. The first set saw both teams enjoy runs. Iowa Western held a 16-12 lead and 22-18 before WNCC made a comeback behind three points from Mitchell’s Anabelle Gillen, including two ace serves, to knot the set at 22-22. WNCC came within one point of set point, 24-23 on a Karen Cordero service point, but Iowa Western closed out the first set with three points for the 26-24 win.

WNCC used a 6-point service run by Ana Costas in the third to overcome an 11-9 Iowa Western lead to a 16-11 Cougar lead. From there both teams traded side outs before Gillen served the final point for the 25-21 win.

The fourth set was tight early on. Iowa Western started to pull away in the middle, leading 14-7. WNCC came back to slice the lead to 16-12, but it was short-lived as the Reivers went up 20-12. WNCC sliced the lead to 21-18 on a Gillen service point but couldn’t make up the ground to fall to the Reivers.

Costas led the team with 12 service points while Adia Sherbeyn, Gillen, and Leslie Mamai-Lagafuaina each had six points. Olivia Transfiguracion had four.

Sherbeyn had four ace serves, while Gillen and Ana Costas each had one.

WNCC finished with 37 kills, led by Luisa Beining with 12, Mamai-Lagafuaina with 10, and Karen Cordero with nine.

WNCC will be back in action Saturday with two more matches at the Reiver Classic. The Cougars will battle Indian Hills at 11 a.m. before wrapping up the Classic with a 1 p.m. contest against Jefferson College.

NU Falls in Final Seconds at No. 24 Rutgers