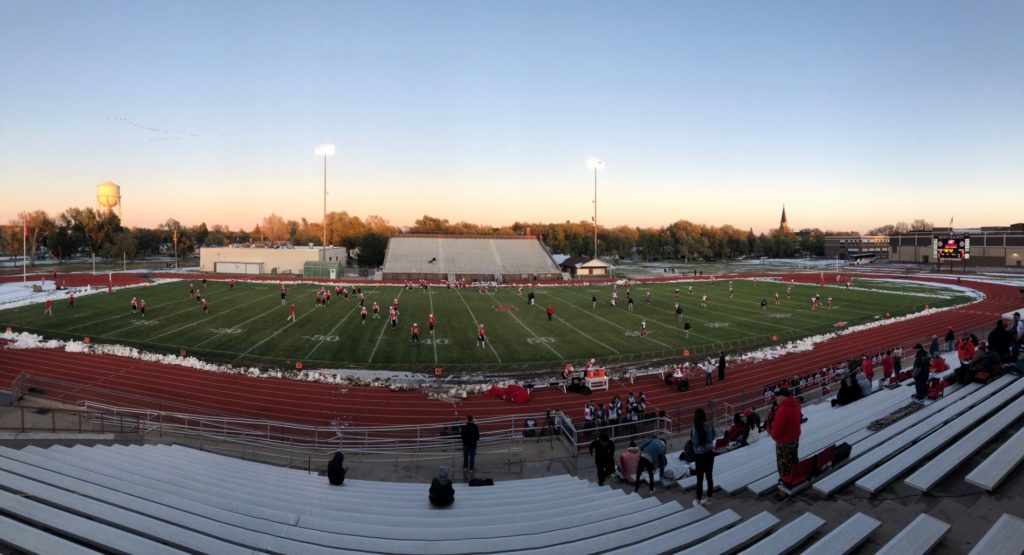 It’s time for things to get real.

It’s a big high school football Friday with the Scottsbluff Bearcats, the top seed in Class B, hosting #8 seed Norris in a quarterfinal matchup at Bearcat Stadium starting at 6 pm.

This round a year ago was the instant classic between Scottsbluff and Omaha Roncalli; so you know the possiblity exists for another  big time matchup tonight.

In fact, we should maybe be expecting this one to be a dandy.

Scottsbluff has been tested only twice this year, winning at Northwest 18-13 in week two and then it was a 21-14 win at McCook in their regular season finale two weeks ago.

Norris enters at 7-3 with wins in games they should win and those three losses have come against some of the best teams in the state; 34-0 against Omaha Skutt, 21-14 in a slugest against Waverly, and they lost early to Bennington 43-33. All three of those teams are involved in quarterfinal games tonight as well.

Both of these teams got comfortable wins in their playoff openers last week. Scottsbluff beat Alliance 48-6 while Norris beat Mt. Michael 38-10.

Norris has a really talented roster. Quarterback Aidan Oerter goes 6’2, 190 and he can throw from the pocket or on the run when he gets outside the pocket and he’s a dangerous runner as well. They’ll run him from the shotgun and also from under center in the option game.

What makes this offense scary is some of the weapons they have in the receiving game. The feature some 6’5, 6’5, 6’4 kids that go up and make plays.

They’ve also gotten back their 1,000 yard rusher from a year ago in Ashton Hausmann. Norris Head Coach Ty Twarling referred to his fullback, Dylan Meyer, as “a hammer”.

Norris averages 30.6 points per game on offense while allowing 20 pointe per contest defensively. Meyer has 105 total tackles this season.

Coach Twarling has plenty of familiarity with the region. He grew up in Dalton, graduated from Leyton in 1996 and went on to play some college ball at Chadron State.

Twarling has plenty of respect for this Bearcats program.

Burying the lede a little bit here, but everyone anxious to find out if Scottsbluff star Sabastian Harsh will be able to go tonight. Harsh still recovering from that knee injury he sufferred two weeks ago against McCook. He missed last week against Alliance as Brett Hill once again filled in with a winning performance.

Harsh will be a game time decision tonight. A clear difference maker, Harsh is one of the elite players in program history and one of the best players in the state.

Senior running back Jacob Krul should be fresh for a possible heavy workload tonight. With the game never in doubt against Alliane last week Krul only had to carry the ball 11 times. On the season he’s over 1,500 yards on the ground with a combination of power, toughness, and breakaway speed.

So much talent for the Bearcats including the offensive line. This week senior Sam Clarkson committed to D-2 national power Northwest Missouri State plus you’ve got salty veterans like captain Terrance Mokeac, Tyler Smith, Joe McCloud, and Creighton Dike.

And on defense the front seven, at times, looks unstoppable. Nick Maag has had a breakout junior season, he’s nearly unblockable. Mokeac brings the energy, toughness, and leadership.

Also up front is nose tackle Trayton Travnicek, who’s flown under the radar a bit, he had a big game last week that included multiple stops behind the line of scrimmage.

This secondary that began the year with four new starters has received better play as the season has gone along from guys like Alex Galindo, Brett Hill, and Kadin Shoemaker, but they figure to be tested tonight.

The Rural Radio Network has coverage tonight on KNEB.tv, Allo channel 15, and Mobius channel 1500 for the TV side. Radio tonight on 106.9 The Trail, and streaming online at kneb.com.

Elsewhere in the Class B playoffs there are some outstanding games including Northwest hosting Omaha Roncalli featuring the high powered passing attack from Roncalli against the Vikings rugged defense. The winner of this one gets the Scottsbluff/Norris winner next week.

If Scottsbluff were to win tonight they would either host Northwest or visit Roncalli a week from tonight.

The other two quarterfinal games feature #2 seed Skutt against Bennington while #3 seed Waverly hooks up with Hastings.