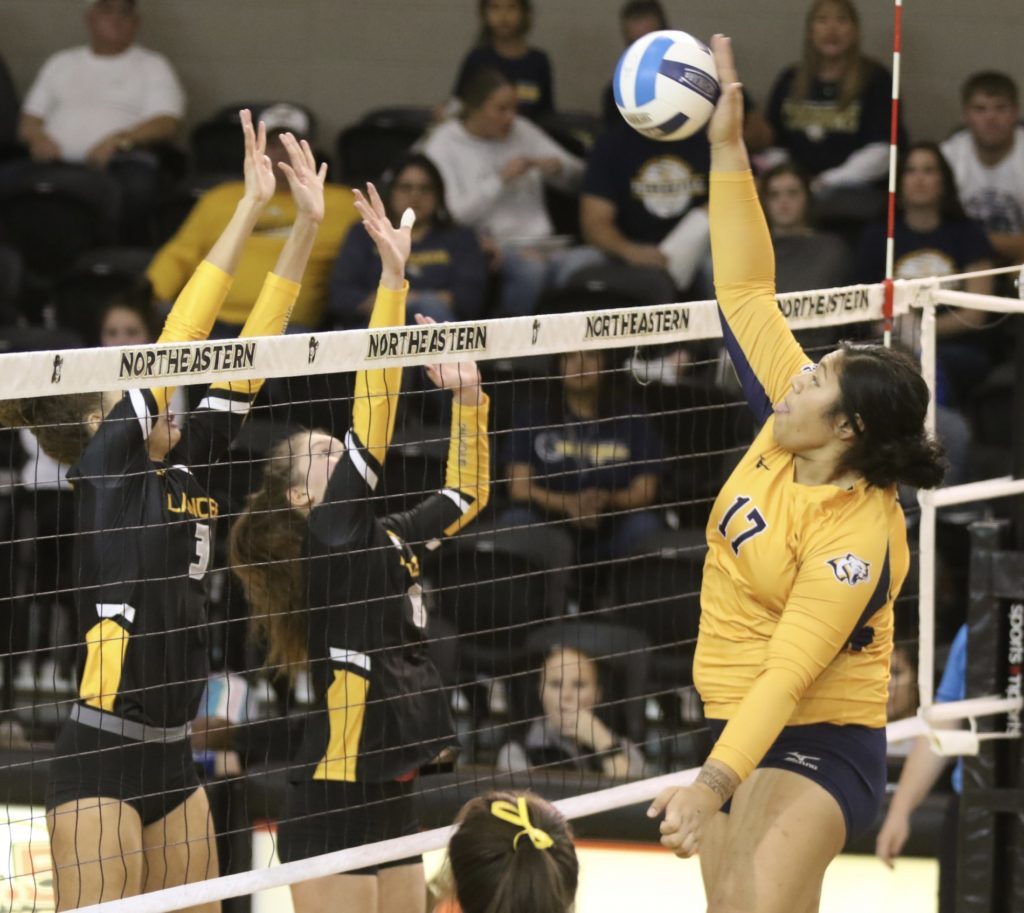 STERLING, Colo. – The Western Nebraska Community College volleyball team came up a few points short of capturing a regional title and berth at the national tournament falling to Northeastern Junior College in the title game.

The Cougars finished the season 28-9 and made a big run to a regional title.

“I thought we really came together as a team,” sophomore Adia Sherbeyn said. “It was our last outing and we really played for Coach Binny. I am happy and I will miss this team a lot. We just wanted to make coach Binny proud.”

Sophomore Gabriela Canavati said they made a run and played with a lot of heart and you can’t ask for more than that.

“We played our hearts out,” she said. “We had that ambition and drive that a lot of teams didn’t have. We had an inner drive and motivation to get through this and keep on going. Unfortunately, the outcome wasn’t what we wanted but we all played our hearts out and left it out on the court. I’m extremely proud of this team and I was honored to have been a part of this team and play with such amazing girls.”

The Cougar players made a frantic run at a berth at the national tournament and despite the season coming to an end, the players said they couldn’t be happier with this team and the season.

“We had a really fun season,” Sherbeyn said. “We all love each other and we all came together and that is al you can ask for.”

Canavati said she wouldn’t change anything.

“The season was amazing and I wouldn’t have changed it for anything,” she said. “I love these girls and this team and I am definitely going to cherish these memories forever. I think the team played exceptional well [in the tourney]. We went out there and had fun. After the incident with coach Binny, we specifically knew we had to fight hard and play for him. Overall, we did a great job and it was a great run.”

EWC first-year head coach Dante Geoffery also thought his team had a good run through the tournament and season.

“We are definitely proud of the way things turned out with this being the first year of trying to rebuild this program,” he said. “You always feel like you should have gone a little further, but we are certainly not disappointed on playing on the last day of the regional tournament.”

The way the Lancers finished, Geoffrey said it is a good start for next year.

“The majority of our team is freshmen and we are glad to see two teams win matches that led them to nationals because that is where we want to be next year,” he said. “So, hopefully this year it shows what it takes, the type of work it takes, and the dedication it takes to get to this point and to compete against really good teams and what it takes to win at the regional tournament. We beat the top seed in the north and the next day we get the top seed in the south. We just have to put it together consistently to get to where we want to go.”

Even acting WNCC head coach Paige Chuidian was pleased with how her team played on the day and in the tournament.

“Today the girls came out with a ton of energy. They were excited and played with a lot of heart,” Chuidian said. “They never gave up and they motivation and never gave up the entire time. No matter what the score was they bounced back. I thought they played really well in the tournament.”

Both matches Saturday were hard-fought. WNCC fought tooth and nail in both matches on Saturday. Against EWC, The Lancers came back from a 11-7 deficit and tied the first set at 11-11 and then went ahead after three J’Adora Hayes points for a 15-12 lead. EWC was up 17-16 before Leslie Mamai-Lagafuaina had a kill and two service points to put WNCC up 18-17. The Cougars pushed the lead to 23-19 on two Canavati points behind kills from Olivia Schaub and La’Treva Kennedy. The WNCC won the first set 25-22.

The second set was back and forth as well. EWC jumped to a 4-1 lead and led 20-18 after two points from Vanja Przulj. EWC led 21-19 before Mamai-Lagafuaina had a kill and Olivia Transifiguracion had three points for a 23-21 lead before the Cougars won 25-23.

WNCC took control early in the third, leading 9-4 and pushed the lead to 17-8 after three Sherbeyn points. WNCC won the third 25-16 on a Sherbeyn point to move in to the title match.

WNCC was paced by Karen Cordero with 17 kills, nine digs, and four points; while Mamai-Lagafuaina had 15 kills, five points, and two solo blocks.

The championship match with NJC was another battle. WNCC trailed in the first set 6-4 before going on a 13-3 run that saw WNCC lead 17-9. The run was highlights by five points and two aces by Alex Hernandez, three points from Cordero, and four kills from Kennedy. WNCC won the set 25-15 on three Cordero points and the set-winning kill by Schaub.

WNCC started the fourth set on fire, taking an 8-2 lead after two points from Sherbeyn and four from Transifiguracion. The Cougars led 14-9 later on two Costas points and led 18-14 at one time before NJC went on a 9-1 run to lead 23-19 before winning 25-21.

Cordero led the Cougars with a near triple-double. The freshman from California finished with 12 kills, 16 digs, and nine points. Kennedy led the team with 15 kills, while Mamai-Lagafuaina had eight kills, two blocks, and two digs.

The Region IX Coaches of the Year went to WNCC’s Binny Canales in the south and Western Wyoming;’s Fredann Soto in the North.

Chuidian said she was proud of what the team accomplished this season as with picking up many post-season honors.

“I am so proud of all the awards the girls did receive after the tournament. They deserved it on and off the court and excelled playing to the best of their ability,” she said. “We had a successful season even though there were a few hiccups. I think this tournament will help them in the long run as student athletes and they will learn how to deal with different situations at other places that they will go on to play at.”