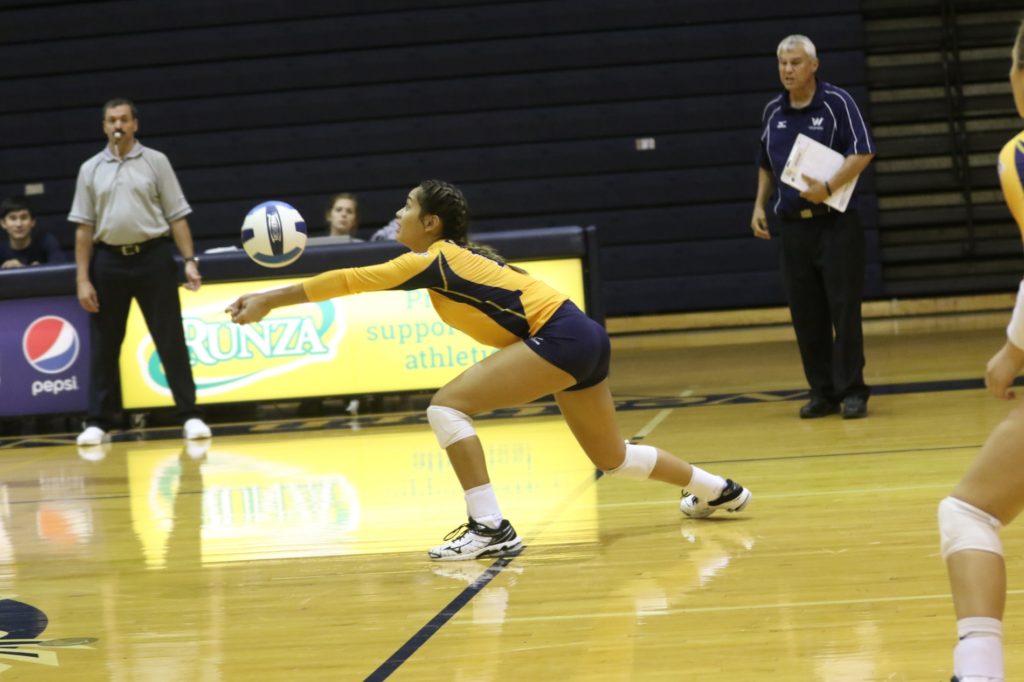 Gabriela Canavati, who finished with 13 kills on the night, said they played well in the three sets that they won.

“I thought at the beginning we started off strong and then we got down in the third because we got complacent of how we were playing in the first two sets,” the sophomore hitter from Laredo, Texas, said. “But once we got back in, we got back on track and we figured out how to play Cougar volleyball.”

EWC coach Dante Geoffrey said his team started slow and that is something they have to work on.

“We definitely picked it up after a slow first half to that first set and showed a lot of good fight and proved that we can hang with a team that belongs in the national conversation every year,” Geoffrey said. “We did not play our best volleyball and that is good news because we were still able to hang and identify little things that we can adjust as the season progresses so that the next we face competition like this, which we will almost every week in Region IX play, that the balls that are getting dug up by our opponent will be kills next time, and the blocks we are just missing, we will get hands on them next time. We are not very far away, but this was a good game to see where we can improve on.”

Both teams had plenty of offensive firepower. The Cougars had three players with double digit kills. After Beining and Canavati, Leslie Mamai-Lagafuaina had 11, Karen Cordero with eight, and La’Treva Kennedy with six.

Canavati said that this Cougar team has a lot of weapons on offense this season.

“That is one of the things we have is we have a great variety of players,” she said. “All of us are god and able to put the ball down. We all do our job when we need it.”

WNCC dominated set one, running out to a 10-3 advantage behind three points from Cordero in rolling to the 25-16 win.

The second was a little tighter. EWC jumped to a 12-8 lead behind a kill from Feierabend and two points from Hosly. The Lances led 16-11 before WNCC made a run. Canavati started the run with a kill and then Olivia Transfiguracion had four points for a 22-19 Cougar lead.

WNCC led 24-21 before the Lancers fought back behind two point from Vitoria Cacciavillani to knot the set at 24. Cordero stopped the run with a kill and then Canavati got the service point for the 26-24 WNCC winner.

The third set was just as tight as the second set. EWC held a 15-11 lead behind two aces from Cacciavillani and led 17-13. WNCC’s Kennedy stopped the momentum with a kill followed by four points from Ana Costas for an 18-17 WNCC lead. The Cougars pushed the lead to 23-20 and led 24-22 on a Canavati kill.

The Cougars couldn’t get the match-ender as Przulj got a kill and then served three straight points to send the match to a fourth game.

The Lancers tried to make a comeback as J’Adore Hayes had two points to cut the lead to 24-21. Cordero, however, hammered home a kill to send the match for the Cougars.

Transfiguracion had a double-double in the win with 13 points and 49 set assists. Ana Costas finished with 17 digs and seven points, while Cordero tallied seven points with her eight kills.

After Tuesday’s win, Canavati said they need to practice hard as they head to a tough tourney in Sterling, Colorado, where they will face New Mexico Junior College and Sheridan College on Friday, and Highland Community College and No. 20 Utah State Eastern on Saturday.

“For sure we are going to prepare and get down our passes,” she said. “We have to pass because we can’t run an offense. We will get better.”

WNCC women move to No. 3 in national poll, both teams hosting Trinidad tonight

Pelini Reportedly Headed Back To LSU