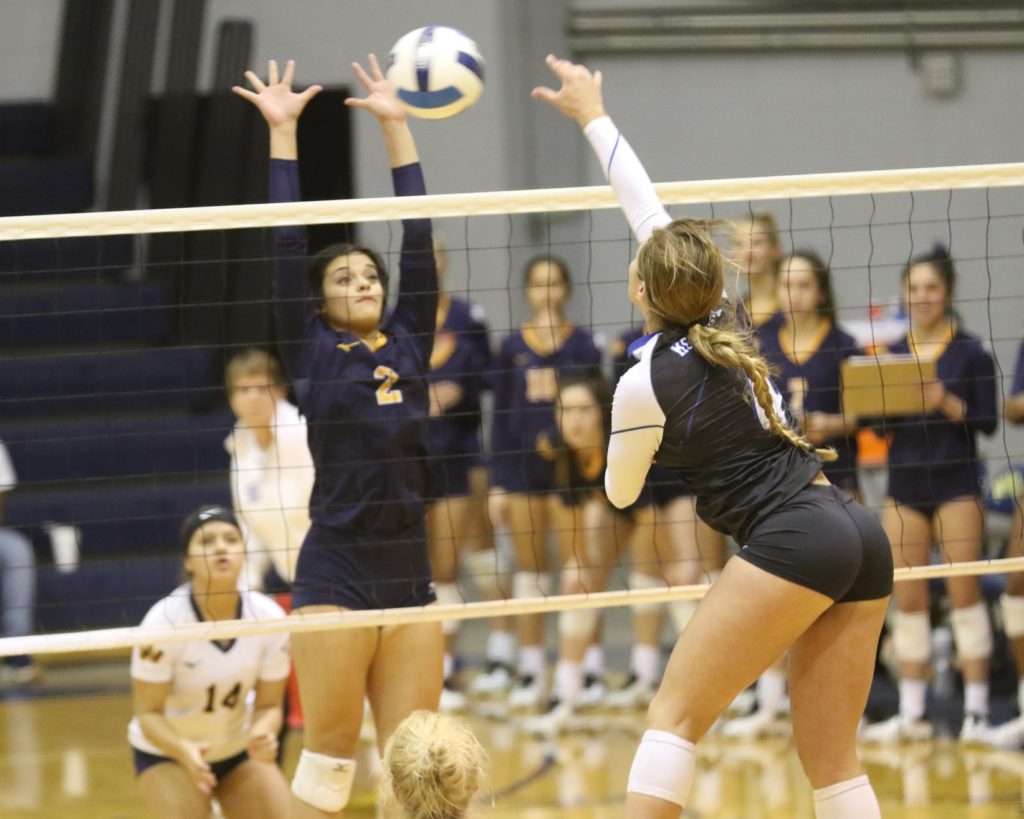 STERLING, Colo. – The 19th-ranked Western Nebraska Community College volleyball team is playing with a lot of heart right now after what they have gone through the past 24 hours at the Region IX tournament in Sterling, Colorado.

Friday, the Cougars fell to Otero Junior College 25-20, 25-17, 25-18 in a game that was postponed from Thursday. After falling into the Contender’s bracket, the Cougars came back and swept through McCook Community College 25-16, 25-19, 25-20 to remain alive for a berth at the national tournament with matches today.

That sets up a match with Eastern Wyoming College Saturday at noon. EWC swept through Western Wyoming Community College 25-20, 25-23, 25-15. The winner of WNCC and EWC will face Northeastern Junior College in the Contender’s title game at 4 p.m. with the winner qualifying for the national title. NJC lost to Otero Junior College 25-16, 23-25, 25-20, 22-25, 15-12. It was Otero’s first Region IX volleyball title in school history.

For the WNCC women, though, the win against McCook was especially sweet since the Indians beat the Cougars in the final home game of the year back on Halloween.

Leslie Mamai-Lagafuaina said the team played well today and they needed to.

“We played great today. Our warm up was good and we had energy from the start,” the sophomore from Hawaii said. “None of us played scared and we just focused on having fun and playing together as a team.”

Last night, the WNCC and Otero match was stopped after WNCC head coach Binny Canales went down with a medical condition. Now, Mamai-Lagafuaina said the team is playing with more motivation for not only themselves but their head coach.

“After all the chaos and everything our team has been through, winning today meant everything for each and every one of us today,” she said. “Not only did we play for each other, but for our Head coach Binny.”

Today was a marked difference in the play for the Cougars, especially in the McCook winwhere the Cougars played with plenty of heart. WNCC was led by Karen Cordero with 14 kills and nine points, while Gabriela Canavati tallied nine kills, Mamai-Lagafuaina added six, La’Treva Kennedy nailed five, and Olivia Schaub had three.

Acting head coach Paige Chuidian said this team played really well all day, even in the short third-game of the Otero match.

“We played really well today,” Chuidian, who picked up her first head coaching victory, said. “We passed the ball, set the ball, and executed. We played efficiently.”

Cordero agreed that this team played with a lot of heart today.

“We played with a lot of energy and united, wanting to win,” the freshman from California said. “We played together and with heart. We just need to play with energy and together and nobody can stop us. We all want to win for the coach.”

Gering’s Olivia Schaub is also having a good tournament. On Friday, Schaub tallied three kills against McCook and five kills in the loss to Otero. She, too, said they were playing for coach.

“Winning for Coach Binny would mean a lot because he has really done so much for this team,” Schaub said. “We couldn’t have done it without him.”

McCook started out the first set up 3-0 and led 7-5 later on. WNCC came back to grab an 11-8 lead behind three Adia Sherbeyn points and expanded the lead to 19-13 after a Cordero kill and then four points. The Cougars won the opening set 25-16 on a Mamai-Lagafuaina kill.

McCook led early in the second set 4-3, but it quickly evaporated when Sherbeyn served five points for a 9-4 lead. WNCC never looked back as Schaub hammered home the winning kill and the 25-19 win.

The second set was a little tighter with both teams going back and forth. McCook held a 19-18 lead late until Canavati hammered home a kill and Ana Costas served four points for a 23-19 lead. WNCC won the set on a Cordero service point to move the Cougars into action on Saturday.

Besides all the players that finished with kills, Canavati finished with five blocks and four points; Kennedy had three blocks and two digs; Mamai-Lagafuaina had four blocks; Olivia Transifiguracion had nine digs, three points, and 21 set assists; Arianna Mitchell had three digs and two points; Sherbeyn had 10 points and five digs; Costas had 19 digs, six points, and seven set assists; and Alex Hernandez had four points.

WNCC racked up nice numbers in the Otero match despite the loss. Mamai-Lagafuaina tallied 13 kills while Cordero had 11. Schaub had five and Kennedy three.

Transfiguracion tallied 23 set assists and five digs, while Andrea Tsvetanova had 11 set assists. Also for the Cougars, Costas had 12 digs; and Sherbeyn with 10 digs and six points.

Saturday will be a big day with the Cougars facing Eastern Wyoming College at noon in an elimination game. Mamai-Lagafuaina said the team needs stay positive.

“Our team needs to remain positive and to just have each other’s back throughout both games,” she said. “One thing about our girls is when we’re hype and playing for each other, we’re unstoppable. Our next few games is all on us. We must remain positive and stick together for the sake of Coach Binny.”

While WNCC has a lot to play for, so does EWC, who is the final team from the North conference left standing.

EWC coach Dante Geoffrey said playing on the final day of the tournament is huge for the Lancer program.

“Playing on the final day of the region tournament is a huge step for this program, and these players truly earned it,” he said. “We’re the last team standing from the North, and now we have an opportunity to do something no one thought we could. On top of all that, it’s invaluable experience for our eight freshmen as we grow our culture and elevate our standards.”

Friday, the Lancers beat a Western Wyoming squad that was within points of playing for a regional title Thursday night when they lost to NJC. Geoffrey said his team played together.

“First and foremost, our team played together,” he said. “At this point of the season we’re all dealing with injuries, no one is 100 percent and we were missing a key contributor due to a concussion. The only way we could succeed is if we did it as a team. Each set we faced different forms of adversity, and we responded calmly and confidently each time. I am so proud of how this team came up big when it mattered most.”

Geoffrey said his team can compete with anyone if they keep their heads in the game.

“If we keep our minds in a healthy place and resist the temptation of expectations, we’ll be able to compete with anyone,” he said.

Chuidian said for her team to bring home a regional title, they have to play together.

“We have to stay together and work as one unit,” the first year Cougar assistant coach said. “we need to play level-headed, we can’t take EWC lightly because they will want it just as bad as we do. It will come down to who executes the ball and stays in control under pressure. It is going to be a good game to watch.”