The McCook win was quite impressive as the Cougars never trailed in the match and there was only one tie, at 1-1 in the third set.

WNCC started the first set up 6-0 after Andrea Tsvetanova had five service points. McCook cut the lead to 11-8, but the Cougars rebounded to go up 16-10 and later 23-18 on an Alex Hernandez kill. WNCC won the set 25-19 on a Hernandez serve.

WNCC started the second set up 3-0 after three Tsvetanova points. WNCC led 6-1 after two Hernandez points. McCook cut the lead to 6-4, but a Karen Cordero kill and then four points pushed the lead to 11-4.

The third set saw the only tie of the match at 1-1, but WNCC came back to go up 3-1 on a Hernandez ace and led 7-2 on two Cordero kills. WNCC kept playing strong as they won 25-20 on a Anuhea Kaohi point.

WNCC had a pair of hitters with double-digit kills. Cordero led the way with 14 kills. Cordero also had five digs, 11 points, and three aces. Kaohi finished with 11 kills as well along with eight digs.

Against North Platte, Tsvetanova had a big service game with 17 points and seven aces. WNCC led from start to finish in the first set, running to an 11-5 lead and 15-9 before North Platte sliced the lead to 15-12.

The Cougars rebounded and led 21-14 and won the first set 25-18 on two Tsvetanova points.

WNCC started the second set well as Tsvetanova had six straight points for a 6-0 lead. North Platte came back and took a 13-8 lead and later 1-11. WNCC sliced the lead to 20-16 on three Tsvetanova points including two aces.

North Platte was at set point at 24-20 when Schaub got a kill and then Macey Boggs served four points to put the Cougars up 25-24. North Platte got the final two points for the 27-25 win.

The fourth set was knotted at 12-12 and North Platte had an 18-17 lead. A sideout tied the game and Boggs had five points to put the Cougars up 23-18. WNCC won the set as Hernandez got a kill and then Gillen served the final point for the 25-20 win.

Cordero led the Cougars with a double-double of 22 kills and 17 digs. Schaub finished with 16 kills and three digs. Kaohi also had a good match with nine kills and six digs.

Also for the Cougars, Gillen had six digs, Boggs had three digs and nine points; Hernandez had three kills and 13 digs; Tsvetanova had 40 set assists and 17 points with seven aces; and Fukamoto had nine digs. 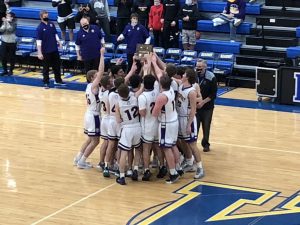 Bridgeport boys advance to state with OT win over Oakland-Craig