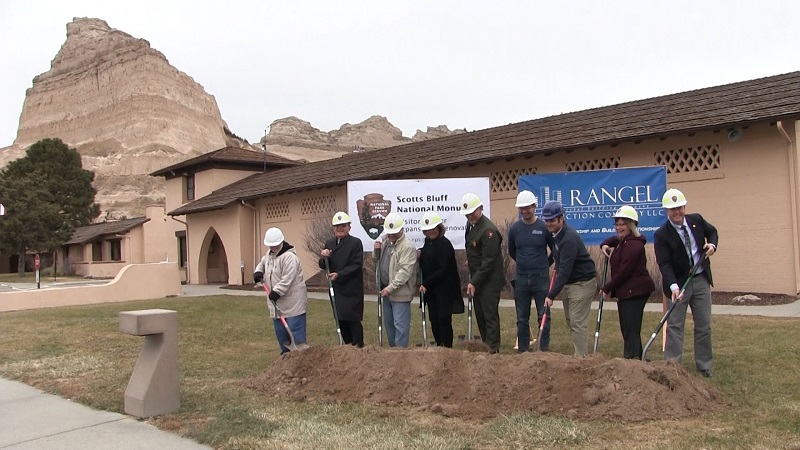 Work on the expansion and renovation of the Scotts Bluff National Monument Visitor Center starts in earnest next month, and Wednesday officials celebrated with a ceremonial groundbreaking at the facility.

The approximately $3.2 million project will take 9 to 12 months for completion after more than 7 years of planning.

Monument Superintendent Dan Morford told those in attendance that even before it was a monument, the Scott’s Bluff was a beacon and a refuge. “From the hundreds of thousands of emigrants seeking a better life by way of the western expansion through the Great Plains to a modern day family seeking great  adventure on the open roads, we envision Scotts Bluff to continue to be a landscape and a landmark for future generations,” says Morford.

In addition to the groundbreaking, Monument staff also unveiled a new 100th anniversary logo featuring a covered wagon standing in the shadow of Eagle Rock. 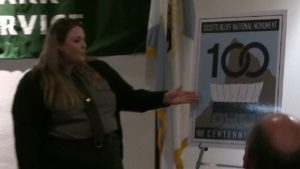 Rangel Construction of Rapid City, S.D., which will spearhead the project, is just finishing work on the Borglum Studio and Residence in the Black Hills. Mario Rangel says involvement in that project opened the door for them on this effort, as they won the national competition to oversee the visitor center renovation and expansion.

A trailer in the parking lot will serve as a temporary home to visitor services and concessions, with centennial celebrations next year taking place at the monument and in nearby communities. Morford says community involvement in the centennial anniversary is only fitting, as it was the residents of the area 100 years ago that convinced federal officials to make the landmark a national monument.